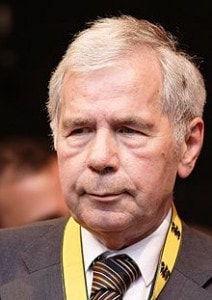 An important question that we face today concerns the way in which the countries that have recently become democratic must seemingly face a period of social crisis. I believe that we are in a new global era. The period of development is finished for almost all the countries of Western Europe and the countries that have not yet concluded this phase have made much progress in this sense. For my country, the entrance into Western Europe was certainly useful, but I think that this brought advantages to all the countries of the European Union. We are grateful to all those who helped us, but we would like to recognise the necessity, also recognised by others, of solving the actual problems that remain. There are some situations that absolutely need to be answered, based on our experience and on the experience of all the other countries. We cannot waste time and must make these decisions, because the stakes are high.

Another point that I would raise is the reform of the United Nations. Personally, I believe a reform is necessary, but the Great Powers did not adequately face the problem of reform. What we really need is an organisation that is able to influence the political choices of the states. The important thing is not so much having a reformed organisation of the United Nations, but having a UN that is able to give answers. Today, the role of the UN is primarily to manage the situations of tension, but the problem is: Who creates the conditions for the development of the world? Why don’t we consider what has been done for Europe? It would be a very important development if the UN had a structure that consented to the creation of a world as we want it, in peace. Obviously, in order to obtain this, an increase in the members of the Security Council would be necessary. Countries such as Brazil and others, which are crucial for future development, cannot be excluded. The future of everyone depends on this. Besides, it is necessary that the UN is equipped with the appropriate instruments in order to face the various situations as they arise. For example, the UN should be provided with its own army for peacekeeping.

Another consideration is the situation in the Balkans. Enormous changes took place over the last few years, eliminating the Balkan menace. However, the problem of Kosovo remains. A lot can be done for peace in the Balkans by solving the problem of Kosovo. The stabilisation of the situation in the Balkans will have a positive effect on the whole of Europe. For this reason and others, Europe must now be stronger than before. The fact that Europe has not yet become the centre of the convergence of interests and actions has caused a great loss.

Searching for new cultural answers is necessary as well. Culture is at the root of peace and, in Eastern Europe, we can examine the European Union experiences and examples of the past, which could be useful to our policies today. An especially good example of these troubles and their hopeful solutions is Hungary. The problems in Hungary are of a social nature: we cannot fight against social problems and poverty without reforms, but we must think about security as well. There is no country in Europe that does not have a close relationship with the foreign policies of all the other nations in Europe. We could gain a great deal from closer collaboration, especially with the new orientation of our country. But why can’t we have a new level in the quality of relationships throughout the European Union? A new level of cooperation could be very useful, not only for Hungary, but for the European countries. I therefore believe that some reforms are necessary in this direction too.

We must be willing to realise reforms. This is the most serious problem for countries like ours. Big multinationals exist, which contribute to a third of global industrial production. However, the presence and industry of these multinationals notwithstanding, has seen poverty double in Hungary in the last fifteen years. Democracy is not only linked to local politics; we must make basic reforms to have a new policy and a new, more inter-state democracy. Being pragmatic in our actions has never been so important. In Eastern European societies, we are already turning away from ideology. The formerly socialist countries have no experience in what to do, to solve the fundamental problems that grip us. However, we have good hopes for our future with Europe.