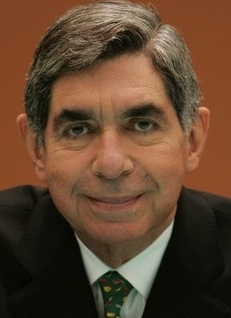 What kind of world are we living in today? If this is a world of disorder, also because it is a world of injustice, in which each of the five hundred richest individuals hold more than one billion dollars in assets while more than one point two billion people survive on less than one dollar a day. It is a world of war and conflict in which total military spending equals fourteen times the amount our governments spend on foreign aid for development. It is a world of unthinking consumption and destruction in which twelve percent of known species are threatened with extinction and world-wide reserves of oil and natural gas could run out in the next fifty years. It is a world of prejudice, of fear and intolerance where many children are taught to hate their peers of another race or ethnicity. It is a world that we cannot accept in silence.

In human history our societies have always known poverty and suffering, but what makes today’s poverty so sinister is that this poverty exists alongside such tremendous wealth. When poverty and inequality remain at such terrible levels armed conflict will be inevitable. Terrorism, the defining malady of our time, thrives in a global system which exacerbates extreme poverty. That disparity of income between and within societies, the spread of infectious diseases, climate change and environmental degradation: it is now chillingly clear that a world where millions endure extreme misery will never be fully secure, even for its most privileged inhabitants. There are no easy answers to the challenges the international community currently faces, but it is clear that global citizens must demand a new ethic for the new millennium.

I believe we all have a mission for the world that motivates us to act in our different capacities to achieve peace. In a hundred years I would like my great-grandchildren to see a world in which each government is democratically elected, is able to fulfil its people’s basic needs, remains at peace both with its neighbours and internal opposition, and uses the tools of economics and science to the benefit of all its people. This is my idea of ethical government, humble yet painfully out of reach.

I want to stress three crucial areas that must be addressed if we are to make this vision a reality: we must strengthen democracy throughout the world; we must battle corruption at all levels of government; we must alter the worldwide focus on military spending.

Today as a Costa Rican, I am deeply troubled by the state of democracy in the developing world. A sense of desperate frustration emanates from its rural towns and the popular neighbourhoods of its vast cities. Frustration with its inadequate schools, its goals, between what the working poor earn and how much they need to live, obscure laws that prevent them from owning their own houses and legally starting small businesses. So called democratic societies, it seems, are structured to exclude them. How much poverty can democracy endure? The question, my dear friends, is not rhetorical – the heavy enthusiasm which swept democratic regimes into power in the eighties has receded, pushed back by popular apathy and violence. The breathtaking resurgence of social unrest in various global hotspots suggests that if a democratic government cannot provide its people with the most basis necessities, it will be held in no greater esteem than the totalitarian regimes it has replaced.

Currently one of the greatest dangers to democracy in the world is corruption. Transparency and accountability continue to elude us, as does honesty in public discourse. It is very easy to craft speeches around opinion polls and to offer up rosy visions of general prosperity about the hard facts surrounding the cost of social justice. In the end, no one is fooled and the result is more cynicism and less participation. Governments’ leaders must embrace the difficult task of leadership: telling people what they need to know and not what they want to hear. Truly to govern is to educate, not to please, not to convince and not to conquer.

Finally, if we are to promote democracy and development we must confront the monstrous irresponsibility of military spending. War and the preparation for war is one of the greatest obstacles to human progress, fostering a vicious cycle of arms races violence and poverty. It is a great disappointment to me that the five permanent members of the UN Security Council who are responsible for over eighty percent of arms exports throughout the world have not taken any stronger steps to ensure humanitarian controls on these transfers.

In pursuing true solutions to contemporary defence concerns, and in creating policies that will allow us to focus on human development, we urgently need to work together as an international community to limit the availability and spread of deadly weaponry. For this reason, I have called together my fellow Nobel Peace Laureates to advocate an international code of conduct on arms transfers, now known as the Arms Trade Treaty. The Treaty calls for a ban on weapons transfers to governments that repress fundamental democratic and human rights, or that commit acts of armed international aggression. I am happy to say that this month we are marking the launch of an international campaign to ratify this treaty into a binding piece of international law.

We must steer human society towards a new morality that acknowledges the plight of those who are hungry, sick or socially marginalized. The course of the twenty first century has yet to be determined, and as Victor Hugo once wrote, the future has many names: “for the weak, it is the unreachable; for the timid, it is the unknowable; for the brave, it is an opportunity.” For all of the turmoil we see in today’s world, we must remember that there is always the possibility of a better future. It will require conviction, courage and perseverance to arrive there. But we have an opportunity: let’s make use of it.