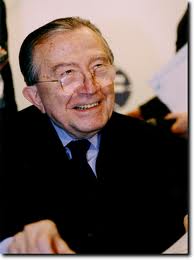 I believe that we, as Europeans and not only Europeans, must make an act of repentance for a sin committed against President Gorbachev. When, in the important G-Seven meeting, President Gorbachev was invited at an extremely delicate moment, he made a passionate speech and said to us: ‘We certainly need financial aid, because we are in great difficulty, but this is neither the only nor the most important problem’. He said: ‘You must give us the time to develop, within what is the Union of Republics, a gradual policy, because different models need to be given to each of these Republics. If you push, for example, to give – or rather better give back – sovereignty immediately to the Baltic Republics, this leads to great confusion in my gradual design. We must create models suited to the different nature of these Republics. At this moment, we must ask for this understanding.’

And I must say that, on the level of heads of state and of government, only President Mitterrand and I understood this design. The President of the Commission, Jacques Delors also understood it well when he said: ‘Note that the economic system of the Soviet Union is very complex, there is even integrated production, where parts are made in Czechoslovakia and parts are made in Hungary. If we demand that everything becomes overnight a market economy in the Soviet Union, we will really create such disorder, such practical impossibility that we will be responsible for the failure of a design that, I repeat, certainly needs financial support, but it needs political confidence, belief in this gigantic operation that has to be done.’

Not to be polemical with anyone, but if you read an official book, the diary of Mrs. Thatcher, you will find it criticizes Delors saying that on that occasion he showed nostalgia for the Soviet Union and for the system of the Soviet Union. This is a passing comment as everyone is responsible for his own words. Naturally, things then developed completely differently, not only because of this, but certainly President Gorbachev was the first to pay a high personal price.

On the occasion of that G-Seven meeting there should have been greater understanding, because making Gorbachev return to Moscow simply with the recommendation to the Monetary Fund to take a look at the problems was certainly rather too little. Because of this, the system that was then created slipped out of the hands and the governing ability of President Gorbachev; it was a totally new system. In the name of privatization, for instance, mega-millionaires were created and I do not know if anyone really, when you did not have freedom and aspired to it, also aspired to a system in which Mr. Abramovic could buy the Chelsea team, competing with American or Australian millionaires.

I say this because I am a chronicler, not a scholar, I experienced these events. The world is unjust, there are too many poor people and too many rich people, a road to understanding, peace, will not be found until there is justice, linked to very fragile foundations. So I believe we must attempt to see how a real step forward can be made in this existing social disorder. We often have to tackle emergency situations. There is no night when we ourselves, in Italy, do not have to face the situations of dozens or hundreds of poor people from Africa or even further away, believing in the illusion to be able to settle here.

In my conclusion, I would like to say, I hope by the time of our next meeting we could give a concrete contribution on one essential point which was mentioned this morning. We all hope that the organization of the United Nations can be changed and updated. Today it has, fortunately, become universal in terms of participation. There is – and the reason behind this is too far away – the domination of five countries with the right of veto and many other things that do not work. So, we must dedicate our future study to an effective model of change for the United Nations. There are some positive things on the move: the European Union, with its enlargement, is becoming almost a continental union. MERCUSOR is a force of a certain importance. Perhaps a little visionary, but the African plan of an African Union is also moving towards the creation or the study of integration. I have no recipe, but studying all together we would be able to do something that is more suited to a class of former combatants like us, because as we have no immediate necessity, not needing to suggest resolutions to be approved by parliaments, we have this freedom to be able to study, examine in depth and make a contribution to create, within the United Nations, a different organization. Improving what is in part on the table is desirable – because when we talk about the United Nations we must talk not only about the Assembly or the Security Council, but also of all the Agencies and of their work performed around the world.

So we could help by giving some ideas. There will be no meeting in which we will not hear someone say, ‘It is not right that one fifth of the people in the world enjoy eighty percent of the resources’. I am a bit tired of hearing this and so I hope those of you who are younger people could hear more optimistic statements.