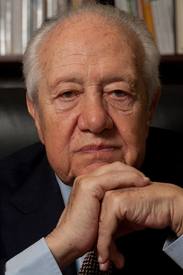 The theme of this session is poverty in the world: a legacy, a calamity or a fatality?

We could answer this question very simply: poverty is a terrible historical legacy that has worsened in the past few years and in a sense it is a calamity, a serious calamity for its implications and consequences. However it is certainly not a fatality. But with this answer we would not go too far. During the Millennium Summit organized by the UN to anticipate the big challenges of the 21st century, we discussed the way to find the means necessary to eradicate poverty in the world. The diagnoses were made in a knowledgeable and rigorous manner. The indices are as well known as the map of poverty and its causes. Science and new technologies today offer mankind the means to win the challenge of poverty. However, political courage is lacking as is the will and the international consensus needed between the most developed countries for all this to be implemented. The issue of poverty and its aggravation, quite the opposite of what we expected, is directly linked to the current development model which, since 1990, institutions like the World Bank, the International Monetary Fund and recently the World Trade Organization have tried to impose. It is the neoliberal model, that seems to be exhausted, as is widely acknowledged today by specialists, economists and even financial economists.

It is therefore necessary to replace the deregulated globalisation under which we live, that has increased the gap between poor and rich even in the most developed societies, that nourishes itself with wild exploitation and leads to globalisation of poverty, which has been going on since the beginning of this century. Similarly, the destruction of the environment, the reduction of human rights, namely women’s rights, producing social apartheid and stimulating racism, violence and ethnic conflicts. Lester Brown, who founded and chaired the famous World Watch Institute, wrote that the generalization of our growth model is materially impossible, and I add, if we do not make a radical change, this model will lead the world to a catastrophe. Brown gives, in this respect, the example of China:

“When the Chinese consume as much paper and cars as the Americans, China alone will consume all the wood and oil that our planet is able to produce.”

But today, more than the scarcity of natural resources, like drinking water for instance, a rare asset in some regions of the planet, and for this reason the object of the greed of large multinational companies, the specialists fear above all that we may be able to consume so much and so inconsiderately as to make life in our planet not worth living.

And the question they formulate is simple: “Will we, human beings, be able to stop the current ecological disaster, that will undoubtedly lead us to a development model based on accumulation, concentration and thoughtless material consumption?”

Clearly we need a sustainable development model, with a real social dimension, since it is not people that have to serve the economy, but the economy that should serve everyone. As we know, sustainable development has three pillars: social, economic and environmental and all three are intertwined. It is impossible to defend one, neglecting the others. This is why we should not simply contemplate, as far as the eradication of poverty is concerned, economic problems, the increase of wealth, but also its distribution. We should consider reducing inequalities and the way the economy is destroying the environment, looking for immediate profit, with no respect for the ecological balance of the planet.

Fighting pandemics like AIDS, for instance, is at the same time a way to fight poverty. Changing the economic and development model in the current political context is not easy at all, but it is possible, as President Gorbachev said.

The awareness of the risks humankind is confronted with is the best way to create a global citizenship, able to put effective pressure on the governments that have decision making powers. And considering that the most developed countries are democratic ones, they have open societies in Karl Popper’s meaning: exerting pressure on their governments is possible and effective, and all the more effective if less violent, since, at least theoretically, governments depend on citizens’ votes and on the movements of their respective public opinions.

The globalisation of economies and the concentration and growing weight of the media, increasingly dependent on the economic powers in our media societies, are responsible for attempting to destroy our state of well- being, for dismantling social policies, and for the growing inequalities even in the most developed countries. The disdain for nature is a mercantile vision of environmental issues and also contributes to poverty.

All this has been said and repeated, but political opponents turn a deaf ear. It is necessary to make them accountable. This general assembly is a forum, from which an incisive and brief document could be drafted in this sense. We have to say that with the money spent on weapons and on an illegal war like the one in Iraq, we could eliminate poverty in the world.

In the declaration issued after the New York conference, prior to the general assembly of UN, the Presidents Lula, from Brazil, Chirac, Lagos and Zapatero proposed, for the first time, the creation of a mandatory tax on global financial transactions and on the sales of weapons whose proceeds could be directly used to finance the fight against poverty and hunger. On this declaration-proposal, the other states have remained silent up to now. But the idea is still in the air and it is up to us, responsible citizens, to nourish it.

Is this a utopia? The philosopher Edgar Morin, in a book he co-ordinated entitled ‘For a realistic Utopia’, maintained that several ideas considered utopias had later become a reality. This is what he calls a “realistic Utopia”. It is realistic today to struggle for a sustainable development model. More than being realistic it is necessary, it is a duty of our conscience.